The History of Our Parish At the turn of the last century, Fr. A. T. Bourke, the pastor of St. Michael Church in Snohomish recognized the need to serve the people in what was considered the wilderness of Granite Falls. For years he had traveled by horseback or in a buggy following trails that led through the forests. Each trip was a day’s journey. In 1903 Fr. Bourke convinced Bishop O’Dea on the need for a church to be built in Granite Falls. The church, a mission of St. Michael, was built without debt because of the zeal of Mr. Klaus, Mrs. Schroeder, and Mrs. Hynes, who collected the money to pay for the church. The first ceremony in the new church was a nuptial Mass for Elizabeth Hynes and William Kelly on May 25, 1903. The first baptism was Michael Francis Diffley, son of Michael and Catherine, on October 8, 1903. The first funeral was for Katherine Schroeder on December 28, 1910 presided by Fr. Tryphon Van de Walle.

In 1998, the Archdiocese of Seattle purchased 31 acres of former farmland off of Highway 92 for the purpose of establishing a new Catholic parish for the growing communities of Lake Stevens and Granite Falls. On July 1, 2004 Archbishop Alexander Brunett promulgated the Mission of Holy Cross as the new parish of Holy Cross with Fr. Joseph “Jay” DeFolco as pastor. Parish offices were opened in downtown Lake Stevens. On August 15, 2004 (Assumption of Mary) the first Mass was celebrated at the new property with a parish picnic with about 200 parishioners attending. On September 5, 2004 two Masses began to be offered each week in Lake Stevens at North Lake Middle School along with the two Masses at the old church in Granite Falls for a total of 74 registered households.

By September 2015, there were 487 households registered at Holy Cross Catholic Church with five scheduled Masses each weekend. The social hall was used as overflow on a regular basis, and was filled to capacity at Christmas and Easter. It was time to build a larger church and a capital campaign was launched in January of 2016 with a construction horizon of 8-10 years. At the end of 2016, our parish had grown to 550 families and we had reached a point where we weren’t able to grow and serve the needs of our community. It became apparent that we needed a new, larger church sooner than later. Fr. Jay and parish leaders broke ground for our new church on Pentecost, May 16, 2018 and construction was completed at the end of February 2019. It’s very fitting that our new church dedication is on Divine Mercy Sunday, April 28, 2019.

As of June 2019, there are now 750+ registered households in Holy Cross parish. 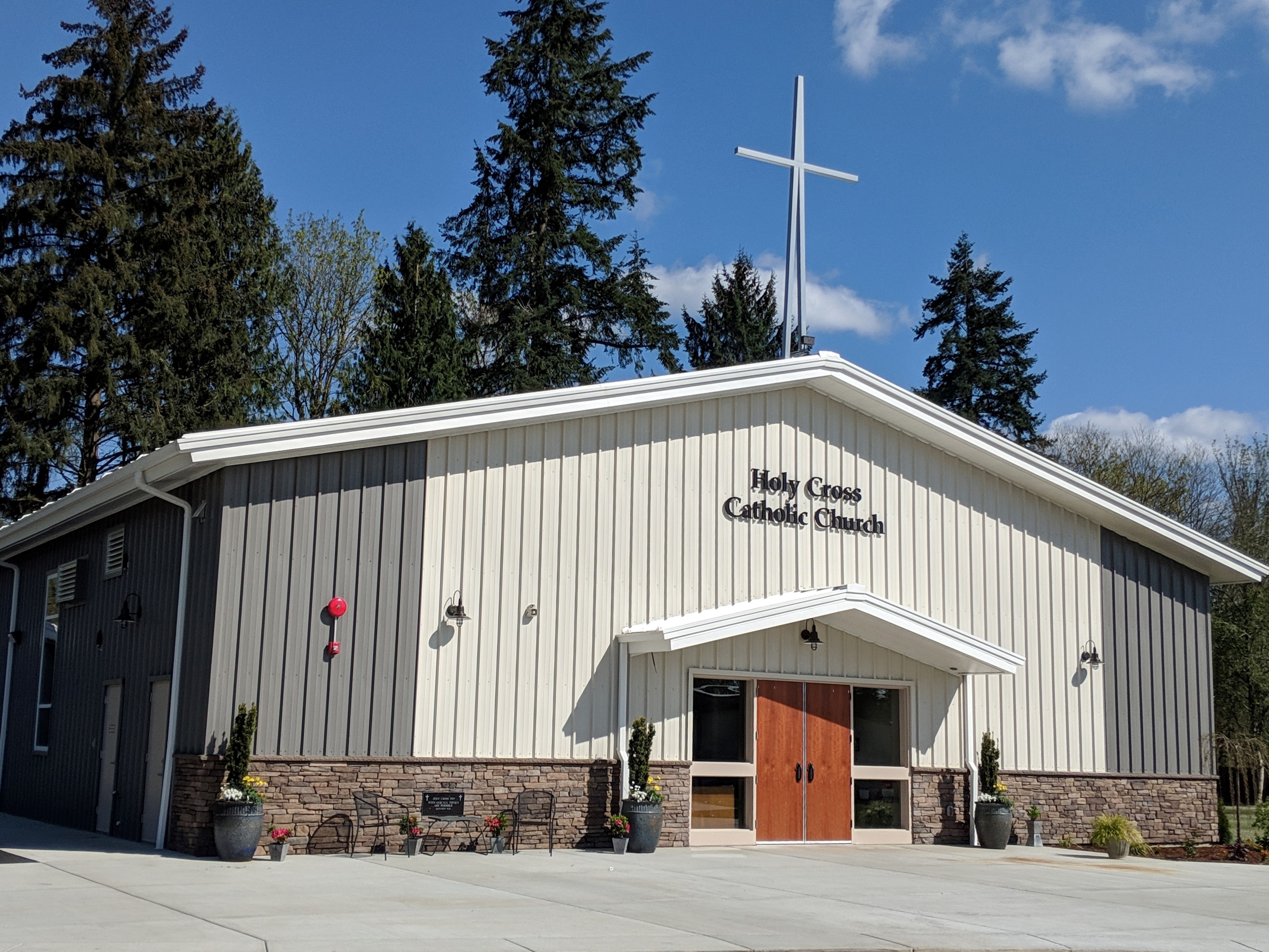 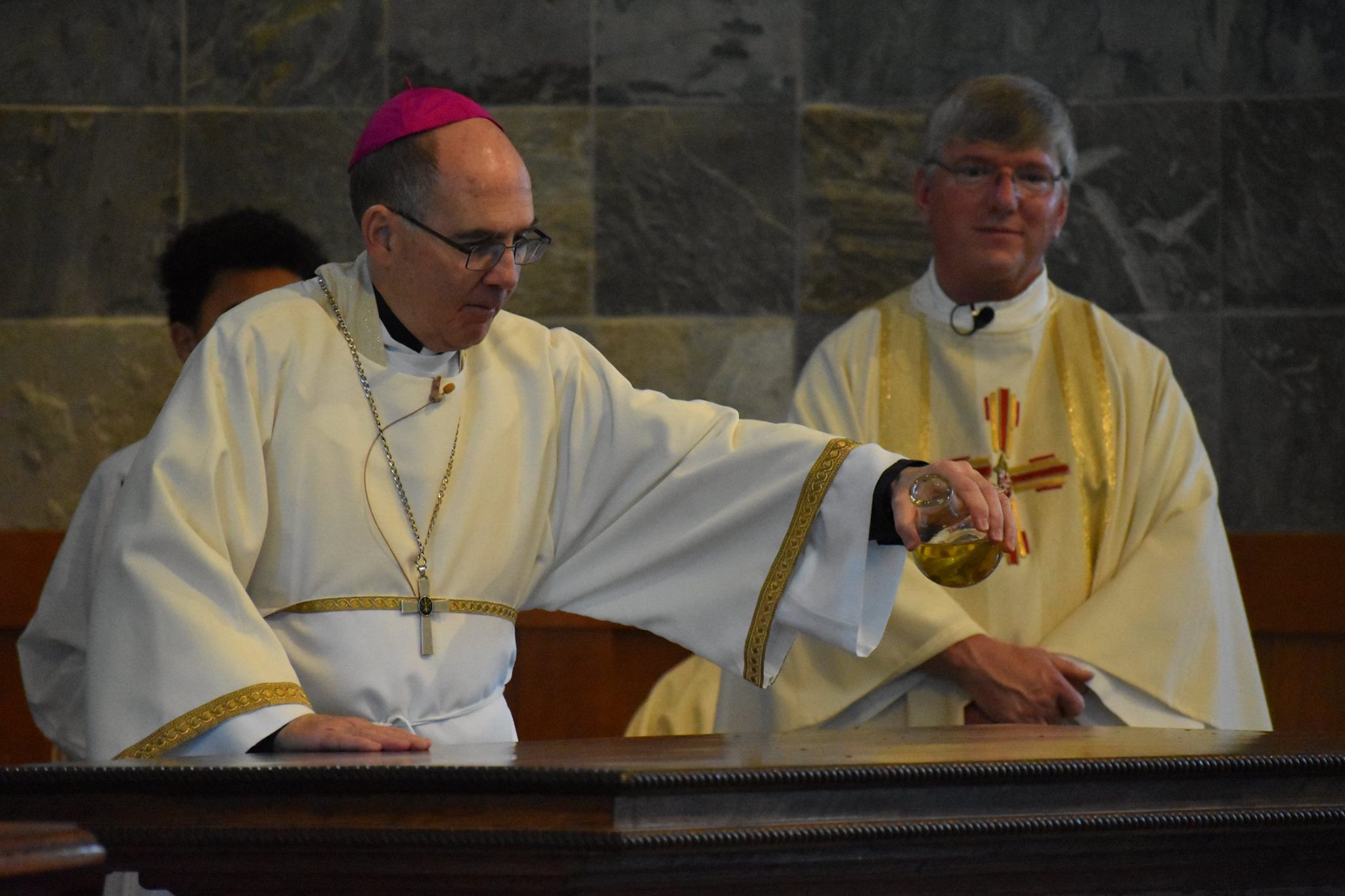 The new church was dedicated on April 28, 2019, by Archbishop Peter Sartain of Seattle